The last night I ever drank, I was with my friends.

From the outside, it looked like a typical Friday night in New York City: a quick happy hour after work, wine with dinner, followed by cocktails, and, of course, dancing.

It was the type of drinking that had been modeled for me throughout my adolescence on shows like Sex and the City. I loved the glitz and glamour associated with a cocktail and felt like Carrie Bradshaw when I imbibed at a trendy restaurant or party. I thought that drinking made me seem charming and adorable but, unlike Carrie, I never managed to end the night after two Cosmopolitans. Instead, I usually blacked out and woke up with pizza sauce on my dress, or, even worse, vomit. (Luckily my clothes weren’t couture, but the dry cleaning bills still added up.) Even though I drank socially, my friends rarely saw me on the messy mornings after a blackout—which is why they didn’t realize there was a problem brewing.

It turns out I was more of a Miranda, at least according to her storyline in the series’s long-awaited reboot And Just Like That... At the start of the show, we saw Miranda sneaking nips in her backpack and ordering wine before noon, presumably jittery about going back to graduate school and unhappy in her marriage. And in the two most recent episodes, Miranda hit her own version of rock bottom, getting drunk in the middle of the day, having sex with Carrie’s boss (in Carrie’s kitchen), and ultimately pouring her liquor stash down the sink in an attempt to quit drinking.

As a viewer with over four years of sobriety, parts of Miranda’s storyline feel stereotypical—and frustrating. For starters, plenty of people with drinking problems don’t sneak off to bars, take shots in the middle of the day, or cheat on their husbands (sorry, Steve). Many of us drank at appropriate times and in all the right places, but still struggled with our grip on alcohol and what it meant for our lives.

Miranda’s story also feels like one we have been told many times: the sad, middle-aged person who is triggered (by divorce, depression, or general malaise) into having a drinking problem. But in a survey of alcohol dependents conducted by the National Institute on Alcohol Abuse and Alcoholism, over two-thirds were diagnosable before the age of 25. This means that many people are drinking problematically in their 20s and 30s and showing signs of alcohol use disorder long before the on-screen stereotypes suggest. And portraying alcoholism as an illness that only affects people over 50 perpetuates a myth that leaves many younger drinkers like myself feeling alienated. I know this to be true because I kept drinking for the better part of my twenties despite my blackouts, simply because I didn’t think they qualified me for sobriety. 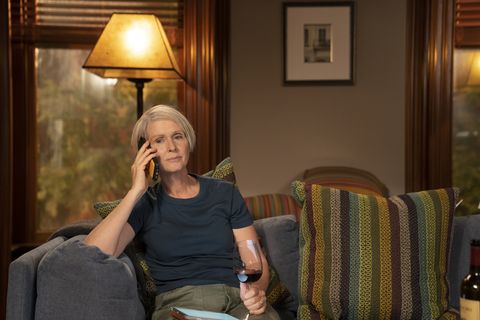 Miranda drinks wine in her apartment on And Just Like That….

Despite these clichés, one aspect of Miranda’s drinking journey does feel more nuanced: the responses she receives from Carrie and Charlotte. One of the cornerstones of Sex and the City has always been the way it depicted female friendships; I grew up believing that best friends met for brunch every weekend, took leisurely walks around New York City, and ended conversations with quippy puns. But AJLT depicts a more realistic, complex version of being friends as an adult, namely the ways in which our friends, despite loving us, do not always have the bandwidth to address our struggles.

We see this in several exchanges, like Carrie’s dismissive response to Charlotte bringing up red flags around Miranda’s drinking and Miranda’s annoyance with Charlotte for making a comment when she suggests ordering champagne at lunch. In last week’s episode, Miranda vents to Carrie about the book she believes Charlotte sent her about quitting drinking. The conversation contains many eye rolls about Charlotte judging Miranda for having three cocktails at a comedy show. “So you don’t think you need to quit?” Carrie asks after a pause, an implied “right?” hanging off the end of her sentence. Miranda nearly screams her response—“no!”—before the two move on to the next topic.

“Miranda’s alcohol problem seems to have materialized out of a crisis and disappeared just as quickly.”

It would be easy to characterize these exchanges as self-absorbed on Carrie’s part, yet the truth is more complicated. As viewers, we have been given access to all of Miranda’s hidden drinks, which makes it clear that she is veering into problematic territory. But Carrie, who has been slightly distracted mourning Big’s sudden passing, only knows what she’s seen. And in a friendship like Carrie and Miranda’s that has spanned decades, it can often be hard to see all of someone’s parts clearly.

Because my drinking looked “normal” on the outside—I still had a job, exercised, and went on dates—most of my friends did not suspect that I had a drinking problem. In fact, whenever I questioned my relationship with alcohol in the years before I got sober, my friends, like Carrie, all but assured me that I was fine. We enable bad habits in the people we love, not because we are selfish, but because we often don’t have all the information. I looked to my friends for absolution, answers, and permission. But even though I was surrounded by friends up until the last night I drank, they didn’t see the hidden effects of my drinking: the sneaky extra shot I ordered at the bar when no one was looking, the shame I felt after regrettable one-night stands, and the anxiety that lingered long after my hangover subsided. Quite frankly, it wouldn’t have mattered if they had; like Miranda, I was in denial. No one but me could tell me whether my problem was “real.”

Miranda’s decision to stop drinking—which we get a glimpse at in this week’s new episode—is ultimately her own. And once she makes it, her friends are immediately supportive. Miranda, Carrie, and Charlotte all toast glasses of non-alcoholic wine (which Miranda characteristically refers to as “this crap”) at a picnic, and Charlotte tells Miranda how proud she is for “quitting cold turkey.” 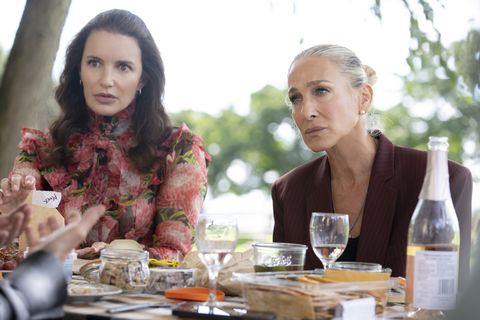 Charlotte and Carrie have non-alcoholic wine in solidarity with Miranda.

This, like the earlier depictions of Miranda’s drinking, is an oversimplified and misleading portrayal of early recovery. According to one study, only one-third of people who are abstinent for less than a year remain abstinent. I attempted to stop drinking three times during my twenties before I finally got sober. But we should bear in mind that it’s not Charlotte’s job to know any better; she’s just a friend, not a trained professional.

While it’s not AJLT’s responsibility to preach about recovery, the writers still made the decision to include alcoholism in this season. And given the show’s enmeshed history with drinking culture, it does feel like there was more room for thoughtfulness in handling this particular storyline. Much like the show has attempted to remedy past cultural blindspots by introducing BIPOC characters and exploring “wokeness,” Miranda’s drinking was an opportunity to thoughtfully depict the nuances of alcohol use disorder and SATC’s glorification of drinking. Instead, for now, Miranda’s alcohol problem seems to have materialized out of a crisis and disappeared just as quickly.

Assuming that Miranda wants to stay sober, I hope that we see her retain the help of a therapist or enter a 12-step program and really commit to her long-term recovery. Unfortunately, we know the likelihood is slim that a problem drinker will successfully stay sober simply by reading a self-help book and replacing her drink with a non-alcoholic alternative. Because alcohol dependence isn’t about the drink itself; it’s a symptom of something bigger. And even if you have the best friends in the world, they’re not responsible for fixing you. All they can really do is cheer you on from the sidelines while you do the work yourself.

Sarah Levy
Sarah Levy is a writer based in Los Angeles.

Why We Need the Fashion Act, According to State Senator Alessandra Biaggi
Netflix’s <i>Archive 81</i> Feels Freakishly Real—But Is It Based on a True Story?
Meghan Markle and Prince Harry Reportedly Did a ‘Very Private’ Video Call With Kate Middleton for Her Birthday
Grace Elizabeth Takes Center Stage
What the Hell Just Happened in the <i>Archive 81</i> Finale?